“Once upon a time,
an angel and a demon fell in love.

It did not end well.”
–Daughter of Smoke and Bone, part I

Usually, I won’t do this – preface a review this way (or, who knows? maybe I will?) – but Laini Taylor deserves some introduction. She is, hands down, my favorite YA author. And for good reason.

There are many YA books that fall into the category I like to call “cotton candy”: they look pretty, taste pretty, but melt in your mouth and are gone. (Not to mention that a steady diet of them will give you a stomach ache…)

Laini Taylor is not one of those.

If I were to give her work a flavor, I’d call it chocolate, deep and luxuriant, with surprising, biting, hidden flecks of sea salt. She intimately wields the thrill of YA, but weaves it with a visceral poetry that much of YA lacks. It is a style that is clearly her own. It shines through all of her works like a thumb print. And it swallows you up.

Her latest (or should I say, forthcoming) book is no exception. 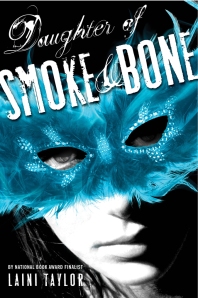 Daughter of Smoke and Bone

Karou, Karou. Girl with  the lapis blue hair knows very little about herself except that her name means “hope.” Oh, and that her life straddles two worlds: the human, and the elsewhere. She has tattoos of eyes (hamsas) on her palms, may or may not have imagined the creatures that appear in her sketchbooks, and is filled up with a strong sense of emptiness – as if her world were not complete.

When a painfully beautiful seraph is pulled into her life – wings like living fire – however, he brings with him a glimmer of otherness, of wholeness and fullness…of love?, of the path to elsewhere, and the scent of…war.

As the story unfolds, it becomes increasingly clear that Karou is more than what she seems. But when she discovers it for herself, it may be too late, and the road back to the only family she has ever known will cost her dearly.

Fraught with elegant and bittersweet romance, this action-laced page-turner is a hands-down work of art. It is the YA we all love – thrilling and exhausting, brimming with suspense – but skillfully so, so you almost won’t even realize that the secrets have been spilled until you are already lapping them up. Taylor’s teases and revelations aren’t abrupt; they are elegant, seamless, and utterly satisfying.

And, though it is only Part 1 of a trilogy, never fear: all of your burning questions will be answered by book’s close – just in time to realize you’ve got a whole aching slew of new ones.

This book, much like her previous Dreamdark and National Book Award-Nominated Lips Touch: Three Times, is signature Laini. Just what that unmistakable style is (delicate? steely? sensuous? ephemeral? lithe? dark? iridescent?) you’ll have to discover for yourself.

6 Responses to “Book Review: daughter of smoke and bone by laini taylor”