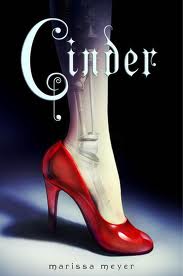 Cinder is a cyborg—which in her society means barely human. Somewhere in a past she can’t remember, there was an accident that left her parentless and a surgery that gave her a foot and a hand she doesn’t want, but can’t live without. Her one glimmer of hope came in the form of a scientist from the Eastern commonwealth—a conglomerate of countries united by the emperor sometime after the devastating WW4—but was dashed before she even know about him, when he died of the Letumosis epidemic.

Now, stuck with a stepmother who hates her, working as a mechanic to pay bills that aren’t her own, in a country swept by plague and threatened by war from the psychotic Lunar queen, Cinder only dreams of escape.

And, then the Prince walks in.

First off, you must read this book. It’s great. You’ll enjoy it, I guarantee. It’s overall tightly written, fast paced, and unique. I was drawn to the cover at first sight and couldn’t put it down!

But, as a connoisseur (hah!) I am truly on the fence about it. As a reviewer, I feel compelled to tell the whole truth and nothing but. So, while on the one hand it was a thrilling read, it has its flaws.

I love the concept—very original. Instead of a technologically backwards future of the sort we’re used to seeing in today’s post-apocalyptic or dystopian novels, this one is very techno-savvy. Reminded me of Westerfeld’s The Uglies in its tenor. Hover cars are all the rage, and human beings survive historically fatal or utterly disfiguring injuries because of extreme advances in surgical prosthetics.

Fairly logically-advanced versions of the internet, computers, and televisions are the main form of communication and entertainment, which helps tie nicely into the present-day world.

The commonwealth, and its emperor are situated in Asia, in a city called New Beijing, making this the second book to allude to fears of China’s rise to world power. However, unlike some, this book doesn’t see that as a bad thing. The Emperor and his family are just, fair rulers, and peacefully cohabitate with other ruling bodies—except those on the moon (yup!).

Instead of climate change, and/or oil shortage being the cause of the apocalypse (both of which have been almost overdone these days…), it’s international conflict that spawned both destruction and peace between Earthen countries. Unchecked greed and power hunger is the reason for the latest threat from the mutated inhabitants of the moon—and their mind-controlling queen.

Up until that point, everything was great. But, the mind control was where the book started to get under my skin. I found it to be too convenient, cheesy, inconsistently implemented, and ineffective.

Similarly, though I appreciated the attempt to align this with the original Cinderella story, a few of the plot elements at the end were too forced. This is a problem I have with a lot of fairytale re-imaginings: they don’t seem to realize you can pick and choose which elements to include—and even then, you can bend them a little to fit your setting. This book tried too hard to get them all in…and didn’t bend or wield them skillfully enough to fit. For one, the “carriage” (an old rusted out automobile) was a potentially really intriguing twist that just didn’t deliver and faded out as abruptly as it appeared. More importantly, however, the ball was just totally out of place, in my mind. Not only was it a virtual impossibility (all the citizens of one major city invited at once?), but then, why such an outdated ritual in full 17th century style was the one tradition that held over from the old to such a futuristic world wasn’t explained. It wasn’t the right scene for the confrontation, and as a result, the final scenes were just not cathartic enough.

As for characters, the evil queen wasn’t very believable—her dialogue made me chuckle at some points. And, last but not least, Cinder just wasn’t a decisive or confident enough character for my taste. Why she waited so long to work on the Prince’s robot—meanwhile the dropped hints and reminders of its import were abundant—I just couldn’t figure out. And her two obsessions—her own imperfection and escape—were overdone to the point of threatening the story not only plot-wise, but overall by making her slightly annoying.

That said, however, I really enjoyed the concept and the world, and will definitely be looking out for book 2—which I hope will benefit from its freedom from the original story and license to do fantastic things with a fantastic concept.