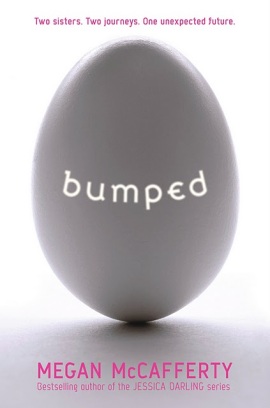 Melody has her life all planned out—or, well, technically her parents do, but she’s ok with that. Really, who wouldn’t give their left ovary for a chance at a 6-figure signing bonus, college tuition, and a few moments with one of the most “fertilicious” sperm donors around? All she has to do is cook up a kid for the wealthy, childless Jaydens who’ve hired out her womb. Being a professional surrogate isn’t just the right thing to do, you know, for humanity and all—since the HPSV (human progressive sterility virus) started sterilizing everyone over 18. Without teen surrogates, humanity would go extinct in a matter of years. No, it’s also very hip—at least so say Melody’s parents, all the ads, and the people at Babies R U, who sell prosthetic “FunBumps” to get flat bellies in the mood. And, so says Melody, who was the first to turn pro at her school and make it OK for everyone else to capitalize on their most valuable assets…before they go bad, that is. Even though she has yet to get bumped (the Jayden’s have taken way too long selecting a boy toy), she’s still as excited as she was when this all began—isnt’ she?

[So, be forewarned: this book is all about sexuality, as you may well have guessed. Though there aren’t any overly graphic scenes, sex is nonetheless very present throughout. Teenage pregnancy is a topic of ambiguous debate, and neither protection nor abstinence is considered seriously, nor is any perspective really committed to at the end. Perhaps some of those topics will be fleshed out (no pun intended..,) in Book 2, but were not in Book 1.]

For the first few chapters, I found this book rather annoying. A combination of heavy, heavy use of unexplained, world-specific slang from Melody, a wad of over-the-top fundamentalism from Harmony, and slow progress resulting from the alternating perspectives caused me to put it down several times. However, about halfway through, I began to get used to the slang. Harmony either softened up or I accepted her as a complex character (and not just an allegorical subject molded specifically to be mocked). The plot finally picked up, and I was surprised to find myself enjoying the last 150-or-so pages.

As for the world, it’s rather thin and flat. Fleshed out predominantly through the slang, it doesn’t ever really differentiate itself from “today.” High schools are high schools; hospitals are hospitals. The only discernable nuances are the virus and an internalized blink-driven fusion of the Internet/Facebook called the “MiNet” (clever phonetics for “ME” net?) that we’ve seen 1000 times already (The Uglies…). However, the virus and its repercussions are intriguing enough to consider (for a more structured exploration of the same, see P. D. James’ novel and the movie loosely based on it, Children on Men). The idea of gametes and uterus being commodities, and young girls being pressured to have not only sex, but babies, by peers and parents is an interesting and complex conflict. With the number of women experiencing fertility problems today and signs of a sperm count decrease being linked to water-borne hormones from oral contraceptives, it’s not even that far-fetched an apocalypse.

However, I felt the book’s handling of the topic was a bit too ambiguous. The focus was put more on the freedom to keep one’s own child, with adoption treated as somewhat undesirable. (I understood that it was forced adoption that was being looked down upon, but awkward, superficial handling of the subject didn’t really leave room for other considerations.) Because of the social situation, romance isn’t a driving force of the novel, which was quite refreshing. But, again, like the idea of teen pregnancy, the concept of sex outside of affection wasn’t well handled—though you do get a basic hint that the narrator feels one should be a prerequisite for the other. In the end, the story becomes more of an answer to the question, What would happen if extremist views that sex should only be procreative took over? than an exploration of the potential fallout from a debilitating virus or a even a promotion of sex’s other uses.

In addition, the reasons why in vitro fertilization isn’t more widely used is not satisfactorily explained at all. This was one of my biggest gripes. As an obvious alternative that’s medically available today, not to give any real reason it isn’t being used in such a future as this is just sloppy world-building. Additionally, though young people are having rampant sex (orgies included) STDs are never even mentioned. A cure has been found for AIDS, the reader is informed at one point, but no other mention of the hazards of unprotected sex are discussed, which I found rather irresponsible, given the age of the characters and the book’s target audience.

Finally, the ending was soooo incredibly forced. It was an unexpected cliff-hanger that was obviously manufactured to extend the brand. I usually hate those types of endings. I didn’t so much this time, but that may be due to the fact that I was reading an e-book, and thus unable to get outraged that the remaining pages were far less than needed to wrap up the plot (until it was already upon me!). Or, it simply might have been because I was so ambivalent about the characters and their story in general.

That said, I can’t deny that I did enjoy it, though I can’t really pinpoint why. While I am not sure I can say exactly what was good about it (nor sure it’s worth spending the time to craft such thoughts…), I can say what wasn’t bad: It wasn’t full of awkward phrases or overly simplified lines—that is, it wasn’t badly written on a line-by-line basis. The characters weren’t utterly odious, annoying, or flat. The plot didn’t completely stagnate. The idea wasn’t totally cliché. It wasn’t a cotton-candy read since, thankfully, it did have some thought-provoking substance. Oh, and it wasn’t romance-driven. (Perhaps its best quality.)

I will surprise myself by giving it a thumbs up on the jargon, which so turned me off at the beginning. Though hard to get used to, it was quite clever. If as much time had been spent developing the themes and plot as was spent on the slang, it would have been much better book.

All in all, I would be flat out wrong if I said it didn’t have something. I’ve spent a lot of time lately contemplating the idea that we are often judging books by too-narrow standards. Where literary criticism doesn’t always turn up any merit (case and point: Harry Potter!), popular opinion belies qualities that the ivory tower is overlooking. It reminds me of the idea of differentiated learning styles—you know, visual, auditory, and kinesthetic. Whatever the literary equivalents of those are, this book has some of them. More on that topic to come.

Cinder is a cyborg—which in her society means barely human. Somewhere in a past she can’t remember, there was an accident that left her parentless and a surgery that gave her a foot and a hand she doesn’t want, but can’t live without. Her one glimmer of hope came in the form of a scientist from the Eastern commonwealth—a conglomerate of countries united by the emperor sometime after the devastating WW4—but was dashed before she even know about him, when he died of the Letumosis epidemic.

Now, stuck with a stepmother who hates her, working as a mechanic to pay bills that aren’t her own, in a country swept by plague and threatened by war from the psychotic Lunar queen, Cinder only dreams of escape.

And, then the Prince walks in.

First off, you must read this book. It’s great. You’ll enjoy it, I guarantee. It’s overall tightly written, fast paced, and unique. I was drawn to the cover at first sight and couldn’t put it down!

But, as a connoisseur (hah!) I am truly on the fence about it. As a reviewer, I feel compelled to tell the whole truth and nothing but. So, while on the one hand it was a thrilling read, it has its flaws.

I love the concept—very original. Instead of a technologically backwards future of the sort we’re used to seeing in today’s post-apocalyptic or dystopian novels, this one is very techno-savvy. Reminded me of Westerfeld’s The Uglies in its tenor. Hover cars are all the rage, and human beings survive historically fatal or utterly disfiguring injuries because of extreme advances in surgical prosthetics.

Fairly logically-advanced versions of the internet, computers, and televisions are the main form of communication and entertainment, which helps tie nicely into the present-day world.

The commonwealth, and its emperor are situated in Asia, in a city called New Beijing, making this the second book to allude to fears of China’s rise to world power. However, unlike some, this book doesn’t see that as a bad thing. The Emperor and his family are just, fair rulers, and peacefully cohabitate with other ruling bodies—except those on the moon (yup!).

Instead of climate change, and/or oil shortage being the cause of the apocalypse (both of which have been almost overdone these days…), it’s international conflict that spawned both destruction and peace between Earthen countries. Unchecked greed and power hunger is the reason for the latest threat from the mutated inhabitants of the moon—and their mind-controlling queen.

Up until that point, everything was great. But, the mind control was where the book started to get under my skin. I found it to be too convenient, cheesy, inconsistently implemented, and ineffective.

Similarly, though I appreciated the attempt to align this with the original Cinderella story, a few of the plot elements at the end were too forced. This is a problem I have with a lot of fairytale re-imaginings: they don’t seem to realize you can pick and choose which elements to include—and even then, you can bend them a little to fit your setting. This book tried too hard to get them all in…and didn’t bend or wield them skillfully enough to fit. For one, the “carriage” (an old rusted out automobile) was a potentially really intriguing twist that just didn’t deliver and faded out as abruptly as it appeared. More importantly, however, the ball was just totally out of place, in my mind. Not only was it a virtual impossibility (all the citizens of one major city invited at once?), but then, why such an outdated ritual in full 17th century style was the one tradition that held over from the old to such a futuristic world wasn’t explained. It wasn’t the right scene for the confrontation, and as a result, the final scenes were just not cathartic enough.

As for characters, the evil queen wasn’t very believable—her dialogue made me chuckle at some points. And, last but not least, Cinder just wasn’t a decisive or confident enough character for my taste. Why she waited so long to work on the Prince’s robot—meanwhile the dropped hints and reminders of its import were abundant—I just couldn’t figure out. And her two obsessions—her own imperfection and escape—were overdone to the point of threatening the story not only plot-wise, but overall by making her slightly annoying.

That said, however, I really enjoyed the concept and the world, and will definitely be looking out for book 2—which I hope will benefit from its freedom from the original story and license to do fantastic things with a fantastic concept.