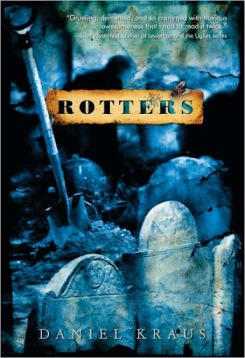 Joey lives a sheltered life. His mother fulfills all of his needs, and it seems Chicago fulfills all of hers—they never, ever leave the city. But when a tragic accident sends Joey to a remote town to live with his father, he finds he has a lot to learn about life…and death.

Before he knows it, he’s been drawn into a macabre underworld that thrives on decay: a secret society of graverobbers. And, as much as his own accumulating stench and his father’s mysterious reputation as a “garbage man” isolate him from the insular, closed-minded society of Bloughton High, they might eventually be the very things that draw him back in.

This book starts with much promise. I didn’t realize just how long it had been since I had sunk my mental teeth into truly high-quality writing, until I finished the first few pages of this book. I was immediately hooked.

The style is what I can only describe as “piecemeal” in a most clever way—each sentence requiring more than your average bit of thought to process. Sometimes information precedes itself—if you know what I mean—and then unravels in the following sentences. For instance, my favorite passage in the book is the description of a girl—only, you’re halfway down the page before you fully understand what or whom it’s talking about. When it finally clicks, however, it’s a truly satisfying sensation.

Elements like that, combined with some truly unusual and refreshingly insightful details really put you behind the narrator’s eyes—you’re right there with him and it’s visceral. When it comes to the gory bits—and OH are there some gruesome passages!—it can be shocking, as well it should be. I won’t lie: I found myself on the subway closing my eyes and massaging my temples, or just gaping in horror at the page (and being gaped at in return by my fellow passengers) after happening unawares upon particular moments. And they are well placed for just such effect. Because not all of the related scenes contain descriptions of what Joey sees in the coffins, you never know when one will jump up and gum you to death. And, don’t be surprised if they stick to you for a while, either. (I confess, I eyed my roasted sweet potatoes warily last night when one of the mushier pieces smeared across the pan: unwillingly found myself thinking about how it had once been “alive”…)

If you’re like me, it will also be those lingering images that prompt a reconsideration of life, death, and mortality, and not Joey’s haphazard and drawn-out goose chase of the subject. As with the sweet potatoes, I can’t help but be constantly reminded of how dualistic life is. No matter how much we remove it from our everyday sight, package it in cellophane, and smother it with sweet-smelling euphemisms, death and decay are inextricably intertwined with life. They are two inseparable sides of one coin. And, the unabashed promotion of this realization is the true strength of this story.

However, the book’s faults are intertwined with its assets, to some degree. Joey’s character, though the stream of his thoughts are belabored, didn’t ever solidify for me. Dimension was given to the smallest details outside of him, but the inside remained opaque. And similarly throughout the book, the evocative style, while excellent when it had something to focus on, wasn’t pared down enough when it didn’t. When combined with a multitude of meandering (sometimes superfluous) twists of plot, it resulted in a really drawn-out story. I put the book down more than once wondering if it would ever end. Without a doubt, the manuscript could have used a good strong structural edit to scrub some of the excessive prose and unnecessary scenes. (For example, I think more than one run-in with “Baby” wasn’t really necessary. They could have been combined and made more effective. Or, a more willing and resolved embrace of the book’s Jeckyll and Hyde undertones would have made the plot as clever as its metaphors.) Alas, this wasn’t done, and without the masterfully gruesome detail, many of the story’s finer points would have been lost in the overabundance. (I know: pot calling kettle!)

Finally—and herein lies my biggest criticism—while this book doesn’t try (or succeed if it did) to be anything other than macabre realistic fiction (despite the fact that the world of the “Diggers” is other, it’s not paranormal), the ultimate villain is absurdly unrealistic. Everything else in the book I could buy, and to strong effect; but that guy’s purported feats—especially his nothing-short-of-miraculous reappearance at the end—were not only surprising and disappointing, but truly irritating.

Overall, however, Rotters is an utterly different, refreshingly nuanced, and excitingly complex read. Though I found the final third of the book lost its way, and am not sure that I gained much from the last 150 pages that I hadn’t gotten from the 300 preceding it, the provocative look at mortality that was offered up so starkly and unapologetically until that point made it worthwhile to finish. Until Hyde took over, I couldn’t help thinking of it as the (less svelt) YA version of Cormac McCarthy’s Child of God.

But, if the mark of good literature is that it changes you somehow, alters your perspective in some way, then I’d give this one a solid vote. Whatever my gripes about the wandering plot, I will never look at rotters (the living or the dead…or the vegetable), in quite the same way again.